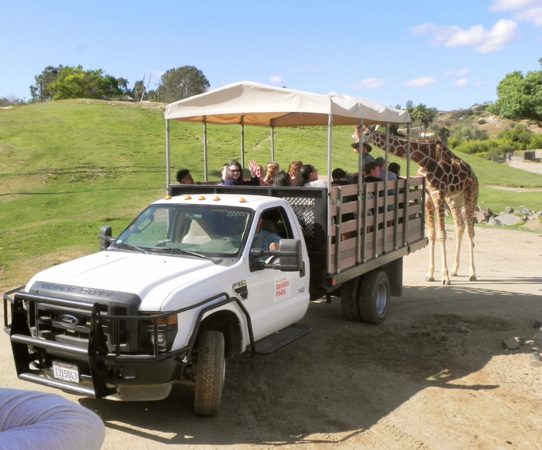 I last visited the San Diego Safari Park in the early 1980s when the concept of a zoo where animals lived in large, more natural habitats was still relatively new. I remember being thrilled to ride the park’s now-defunct monorail (it’s been replaced with a more nimble and easy to repair tram) and watch African animals I’d only ever before seen in books.

The park is still unique in its size and scope – situated on 1,800 acres it is home to over 2,600 animals and 3,500 species of plants. It’s a beautiful and fun place to learn about diversity and interdependence.

The Safari Park is also pretty much the perfect attraction for a multigenerational family vacation – I visited with my husband, in-laws, and 10- and 12-year-old sons and there was something for everyone from Robert the “talking zebra” to a bald ibis out for a stroll.

The San Diego Safari Park: A Different Kind of Zoo

Guests of the San Diego Safari Park pay an admission fee that covers all of the foot-accessible exhibits as well as rides on the Africa Tram, which circumnavigates the African Outpost and skirts the edge of the African Plains exhibit. Then there are a number of additional safari experiences that can be purchased for an extra fee.

It would be easy to forgo any of the extras and just spend the entire day just wandering through the park (my family explored for almost four hours with some time for lunch and didn’t see everything). Among the many animals we saw were gorillas, tigers, lorikeets, meerkats, condors, and a very smelly pelican.

Throughout the park you’ll also encounter animals out and about with the humans who care for them; these experiences offer a chance to see how the animals are fed and trained.

There are playgrounds, a petting zoo, and numerous places to have lunch or a snack throughout the park as well.

In addition to all the walking, we decided it would be nice to give everyone’s legs a rest – and give the kids and grandparents a chance to do some intensive animal viewing together – by taking a Caravan Safari Tour. This tour visits areas of the park that are not accessible in any other way and also offers a chance to learn and ask questions of a knowledgeable naturalist.

When you purchase your tour, you are given an assigned time and are asked to meet at the Safari Base Camp fifteen minutes in advance (word to the wise – take advantage of the nearby bathrooms, since you won’t have a chance to go once you are out on the ride).

The ride takes place in a very comfortable covered cart that’s pulled by a truck. Our friendly driver was careful to stop whenever our guide Jeanne asked him to. She was full of stories and information about the animals, pointing out animals tucked behind rocks and trees, explaining what their behaviors meant, and making offering funny similes (dried palm fronds are apparently “like jerky for giraffes”).

The first and biggest photo op of the safari tour is the opportunity to feed a giraffe. The animals are very used to it and one of them will amble over as soon as the truck stops.

Everyone loved this of course, but perhaps even more special was the chance to see and learn so much about animals I’d never before encountered from wapiti, or an Asian elk to gorals, which are kind of like a cross between goats and antelopes.

What was meaningful was that Jeanne conveyed the significance of the park’s work throughout the tour. Gesturing around her at the unfamiliar animals, she pointed out numerous endangered species.

“What does endangered mean?” She asked us rhetorically before answering her own question. “It means that if we don’t do anything they’ll all be gone between five and seven years.”

Among the facts we learned:

It was genuinely thrilling to be out among the animals, especially because it offered a full sensory experience. We touched the giraffe’s thick, rough tongue; heard and felt the pounding of a herd of wild horses as they galloped across their territory; watched up close as a male blackbuck antelope tried to impress the females who had strolled into his territory to graze.

The Caravan Safari last about two to three hours and is not a budget experience – at over $100 per person it’s one of the more expensive options on the park menu, which also includes a Behind-the-Scenes Safari and a ropes course. But as a completely unique zoo experience, it is worth the money. For one thing, it offers the only way to see the Asian Savanna portion of the zoo – and the animals there were among the more unusual and interesting.

But it also was a really special and memorable way for kids, parents and grandparents to enjoy and learn together. And of course, none of us will ever forget looking right into the smiling face of a giraffe.

The San Diego Zoo Safari Park is located in Escondido, which is north and east of San Diego. We waited until after rush hour on a weekday and drove there from Coronado, just outside downtown San Diego, in 45 minutes. There’s a fee for parking.

Browse our list of the best family-friendly San Diego hotels

Editor’s Note: The San Diego Safari Park provided the Gormans with four adult admissions to the park, but did not pay for the children’s admission, lunch, or the Caravan Safari.Photos by Mara Gorman.